"Vinegar is an environmentally safe weed killer
that everyone can use!"

Can one use vinegar for killing weeds?

Almost every household has a bottle or two of vinegar, be it wine, rice or apple cider vinegar stored in a kitchen pantry for cooking or medicinal purposes.

Can this natural, non toxic, environmentally safe and inexpensive household product also double up as a pesky weed killer? If so, this would be an environmentalist's dream come true!

Many claims have been made over the last few years regarding vinegar as a weed killer.

Vinegar-based sprays have been reported to not only kill all types of weeds , but also "blackberry and scotch" bloom with a single soil application which lasts up to a year!

In the light of these claims and in the search to find an inexpensive and environmentally safe weed killer for organic farmers, the US department of agriculture's agricultural research service (USDA-ARS) have conducted and continue to conduct studies on vinegar for killing weeds.

The researchers found that perennial weeds such as Canada thistle, when treated with household vinegar (5% acetic acid content) showed 100% shoot burn-down but the roots were not affected so the shoot always re-grew.

For annual weeds such as foxtail, lambsquarters, pigweed and velvetleaf the 5% vinegar did not produce reliable weed control.
However more concentrated vinegars (10 to 20% acetic acid content) were more successful and provided 80-100% control of these annual weeds.

Unfortunately vinegar is not a selective herbicide and can damage any plant contacted by the solution. So researchers recommend trying vinegar as a weed killer for special situations such as spot treatment of weed patches between rows of plastic mulch or other areas where contact with crop plants can be avoided.

They also recommend using vinegar for killing weeds along roadsides and range lands and for homeowners to control weeds around brick walls, sidewalk and driveway cracks.

Vinegar can be applied to plants in two ways:

It can be sprayed directly on the plant (used as a contact herbicide) or it can be applied to the soil. (used as a soil drench)

Spraying vinegar directly on a plant dissolves off the waxy protective coating on the foliage, making the plant vulnerable to desiccation. The plant will then dry out all the way to the root.

Pouring vinegar on the soil lowers the soil pH to a point where the plants cant survive. 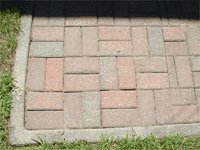 This spring, I decided to use vinegar on a section of my own back yard patio when I noticed weeds and many small ant hills popping up there.

I simply poured the less expensive household white vinegar (not apple cider vinegar) onto the affected area one evening and did the same the following evening.

The photo on the right shows the results.
What an improvement, that area has been weed free as well as ant free all summer.

In Sweden, vinegar has been registered as a herbicide for weed control in concrete pavements.

So if you want to eliminate those pesky dandelions from your lawn without resorting to chemical pesticides, hand digging to remove the tuberous root is still the best natural method.

Or you can try applying corn gluten meal which has been found to help control dandelions and crabgrass and is also a slow-release organic fertilizer.